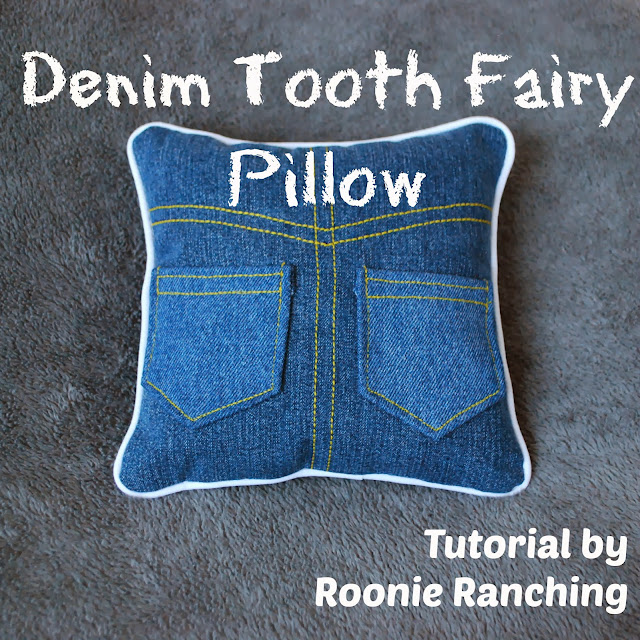 The possibilities for embellishing this Denim Tooth Fairy Pillow are endless, but here are basic instructions for making a bare-bones version as a jumping-off point.  It would be adorable to make one with some of that pom-pom edging, use colored denim or heavy canvas, add a little appliqué detail, or even simply sew some decorative stitching on the pockets.  These would be great gifts for any upcoming birthday parties the kids are invited to, because it's one-size-fits-all and everyone loses teeth!

You can use strongly contrasting denims (as with the one on the left, which was a prototype with slightly different sizing), and any color or stitching or piping that your heart desires.  I can't wait to make a few more with some bright colors. 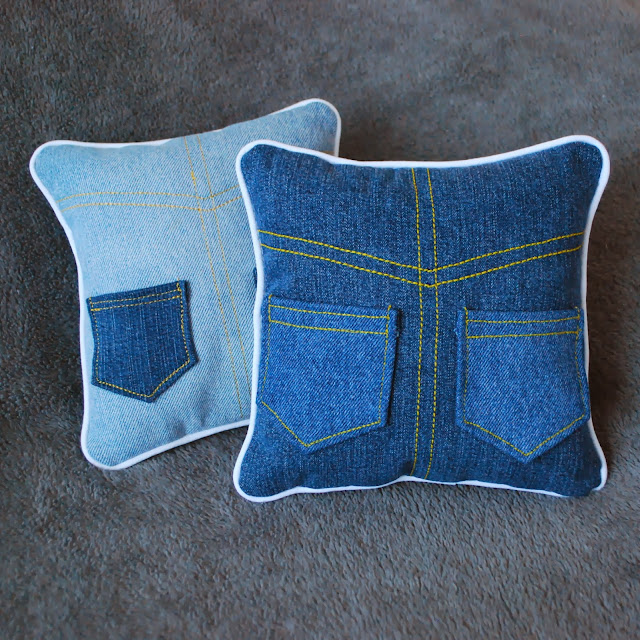 Old jeans (or denim off the bolt) or heavy canvas, in two contrasting shades if you desire
* Cut the denim meant for the main part of the pillow into two 8" squares
* Slightly round the corners of each of the main pillow pieces
* Pattern drafting directions for the pocket shape are below
Piping -- at least 36"
Thread color of choice for topstitching
Thread to match piping
Denim/leather/heavy duty needle
Pillow stuffing
Paper (just a small scrap)
Zipper or piping foot (not required, but helps a bunch)

Seam allowances vary throughout the project and are indicated at the appropriate times. 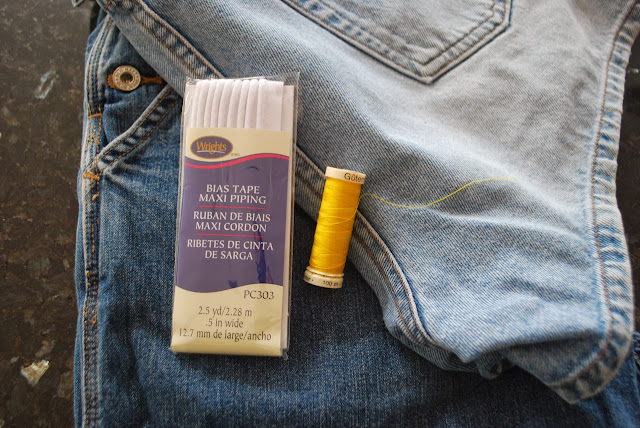 Draw a rectangle with a width of 3 1/2" and a height of 3 3/4".  Draw a dot on both the right and left sides (the longer sides) at 2 3/4" down from the top.  Draw a dot in the center of the bottom (shorter) side (at 1 3/4" from the edge).  Connect the side dots to the bottom center dot to form the upside down pentagon shape for the pocket pattern. 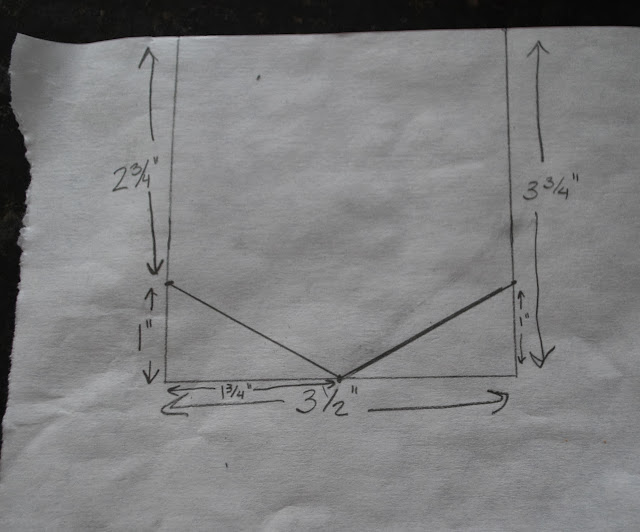 Cut out the pattern and cut two of these shapes from the denim meant for the pockets.  I love to use freezer paper so that I can iron the shiny side of the pattern piece to the fabric, which temporarily makes it stick and prevents it from slipping around while I'm cutting. 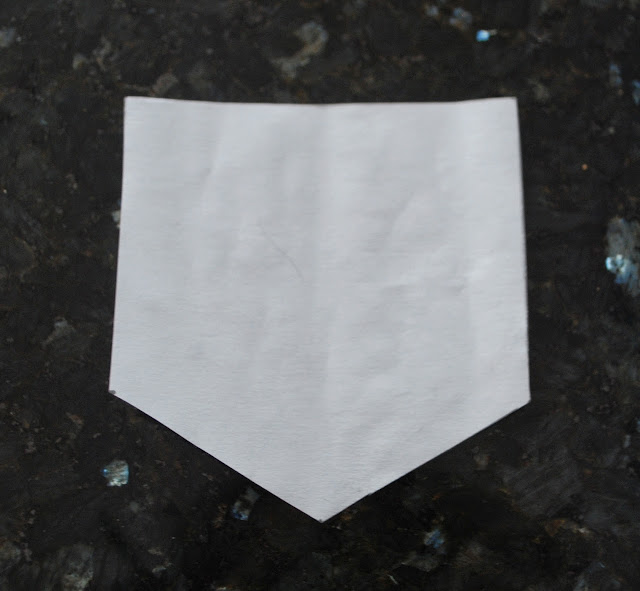 STEP ONE: Preparing the pockets

Press under each side of both pockets 1/4" and steam the heck out of them with your iron.  With a thicker denim, it works better to press about 1/3" under, which won't make much difference in the finished product. 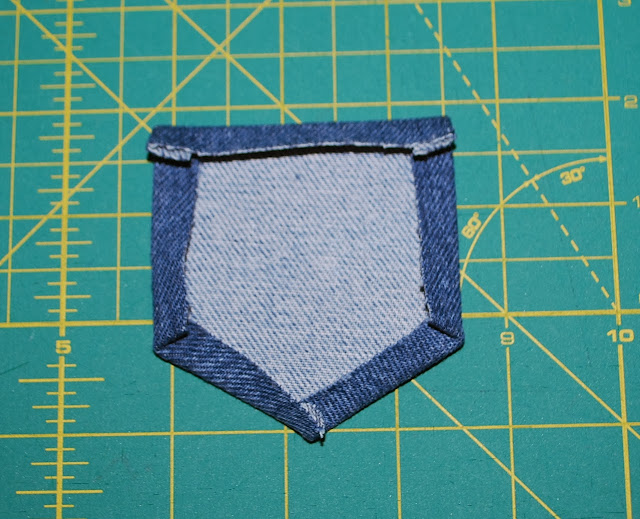 Denim does NOT like to stay in shape, so flip each of the pockets over at add some topstitching 1/8" from the edge to keep it all stable.  Add a second line of top stitching 1/4" below the top horizontal line.  I went over both of the horizontal lines of stitching twice to make them darker.  The other four lines will get a second layer when you stitch the pockets on to the pillow, so no need to reinforce those at this time.  Repeat the whole process with the second pocket, then press them well. 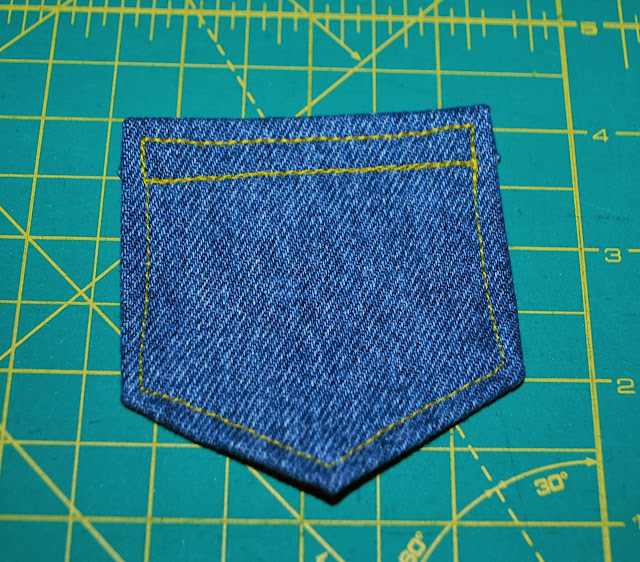 With a blue pen (or a disappearing fabric marker), draw two vertical parallel lines 1/4" apart on either side of the center of the main pillow piece.   It's hard to see in this photo, but you can see it if you squint.  Top stitch down both of this lines.  I used the triple stitch function on my machine so the stitching would look extra strong, and it looked pretty cool.  If you don't have a triple stitch function or don't know what the heck I'm talking about, you can achieve a similar effect by just sewing over the lines two or three times. 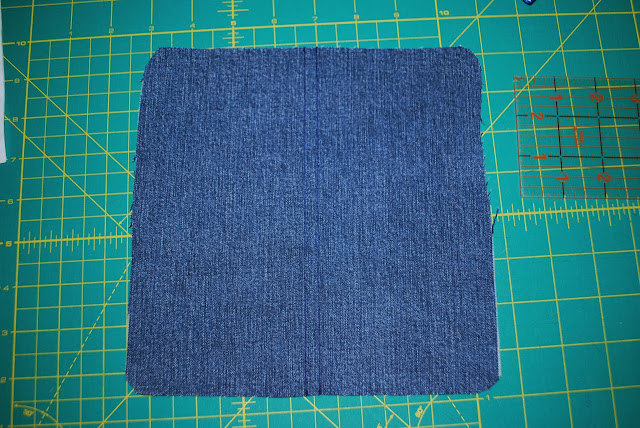 Doesn't the triple stitch look nice?  Anyway, with your pen, make a dot on both the left and right sides that is 2" down from the very top (where the corners would have been if you hadn't already rounded them off) and another one 1/4" below.  Then, draw dots down the center line (between the two lines of stitching you just did) at 3" down from the top edge, and then draw another one 1/4" below that.  Connect the top dots on each side with the top dot in the center, and the lower dots on each side with the lower dot in the center to form the two parallel chevrons.  It probably makes more sense just to look at the photo below. 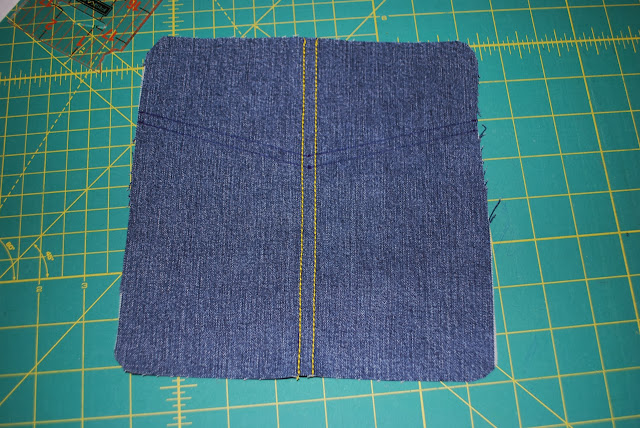 Stitch over those lines in the same manner as the vertical lines (triple stitch if you have it, several layers of topstitching if you don't). 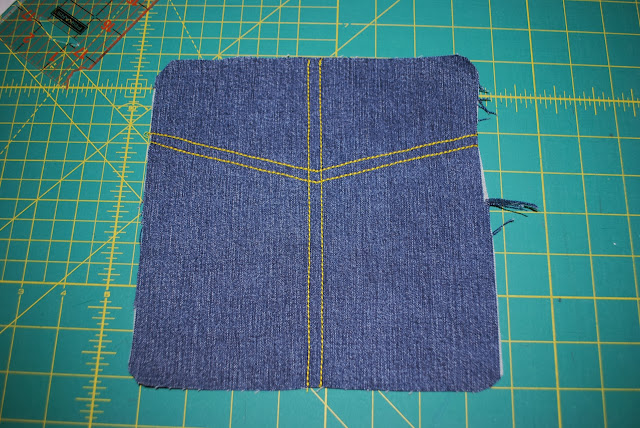 STEP THREE: Sewing on the pockets

Pin on the pockets with their edges about 1/4" or so from the vertical lines of stitching, and about 1/2" below the bottom point of the chevron point.  You can totally just eyeball it, but make sure that the pockets aren't too close to the edges of the pillow piece -- keep them at least 3/4" inches away or so. 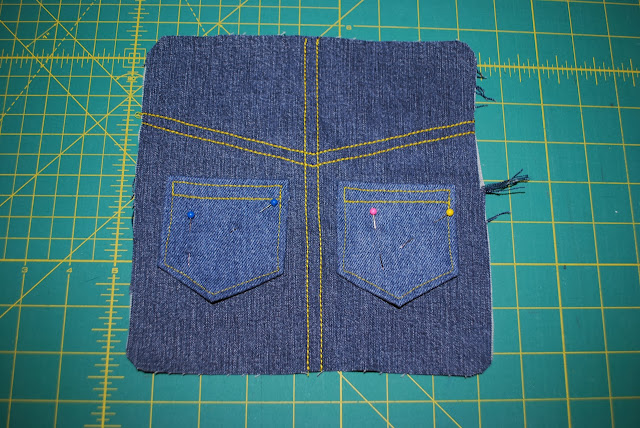 Stitch the pockets on by going over the side and bottom lines of stitching.  Don't sew across the horizontal, or else you will stitch the pockets shut.  Sew a few reinforcing stitches at the tops of the pockets to make sure overeager Tooth Fairies don't accidentally pull the pocket loose. 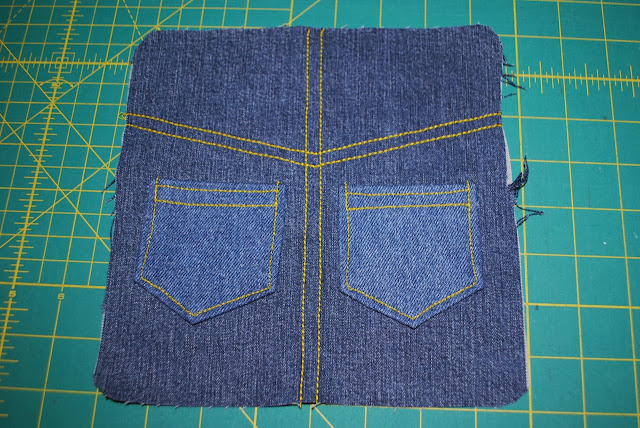 Swap the regular foot on your machine out for the zipper foot.  I hear a piping foot is super awesome for projects for this, but I don't have one of those just yet.  Remind me to add one of those to my wish list!  Also, change your thread to match the piping.

Before you get to each corner, clip the raw edge of the piping (almost all the way to the stitch line, but not quite there) in a few places to help ease the piping around the corner.  I wish I had remembered to take a picture of it.

When you get near the beginning, cut the end of the piping so it overlaps the piping at the start by about an inch and a half.  At this point, you can either cross over the piping ends (with the raw ends forced toward the outside of the pillow) or you can do a nifty trick I learned from Noelle O Designs to sneak one end into the other to make it appear almost like never-ending piping.  She explains the process far better than I ever could, so go to her tutorial for better instructions. 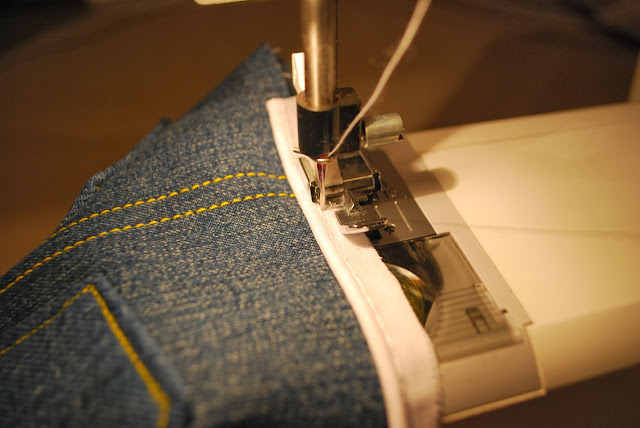 Here is what it should look like once your piping is added.  You can see the little clips I made (probably far more than necessary) at the corners.  I chose to use the continuous piping method and you can barely tell at the bottom where the ends of the piping come together.  Such a nifty little trick! 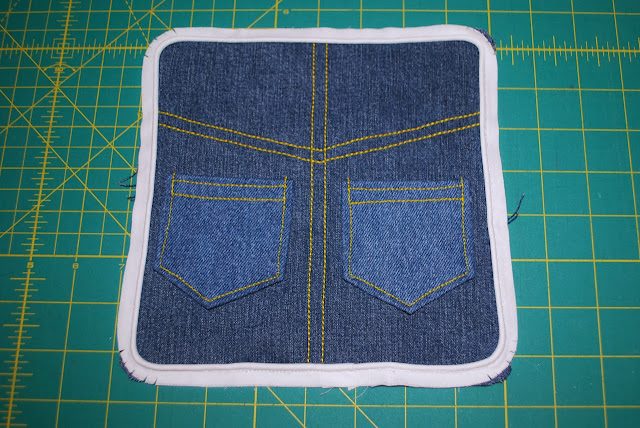 Pin the other 8" pillow piece to the piece with the piping with the right sides facing.  Make sure the piece with the piping is pinned on top, because you will be stitching the pillow pieces together by following the stitches you can see on the wrong side.  Line up the raw edges very carefully, because there is not a whole lot of room for error with such a small seam allowance.

Starting on the right side, a couple of inches up from the bottom corner, sew the two pieces together by stitching right on top of the line of stitching that attached the piping.  Make sure to stop about three inches before you reach the beginning so there is a gap left for turning. 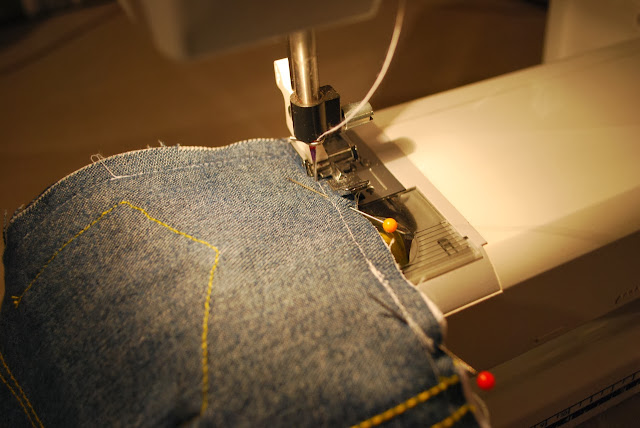 It looks like I forgot to leave a gap when I stitched the pieces together, but that's just the piping stitching line that you can see in the gap.  In this photo, you can see some extra stitches in the seam allowance where I started and ended my stitching.  A better explanation of the reason for this is found in the Neat Finish Window Pouch Tutorial, but it helps the fabric turn in after the work it turned right side out. 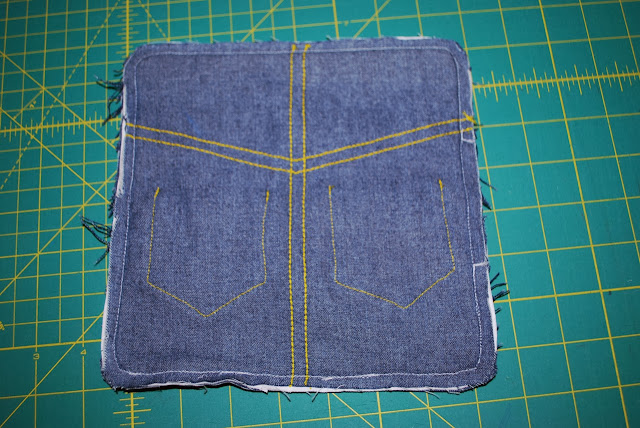 I totally forgot to take pictures of it, but make sure to cut three tiny wedges out of the seam allowance around each corner (near the stitching line, but not through it) to reduce bulk once the piece is turned right side out.  After you cut those wedges, turn the pillow right side out and admire how adorable it it.

Add some stuffing (not tons -- don't overstuff it!), making sure that enough gets into each corner.  Then, grit your teeth, grab a hand-sewing needle and some of the thread that matches your piping and get to work using a blind ladder stitch to hand-sew the opening closed.  I HATE THIS PART, but it looks much nicer than if you try to sew it closed by machine.  I have tried and tried to get pillows to look nice by machine-sewing the opening closed, but it just doesn't seem to be possible. 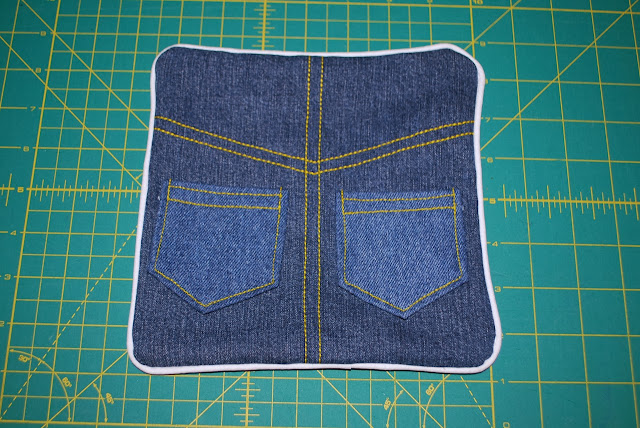 All done!  Now grab the nearest kid and wiggle a baby tooth out of his or her head to use as bait for the Tooth Fairy.  Charlotte wanted to know if she had to lose two teeth at a time because there were two pockets on the pillow, but I told her the other pocket was so she could write the Tooth Fairy a note or something.  I don't always have all the answers, but I have no problem making them up in situations involving fairies. 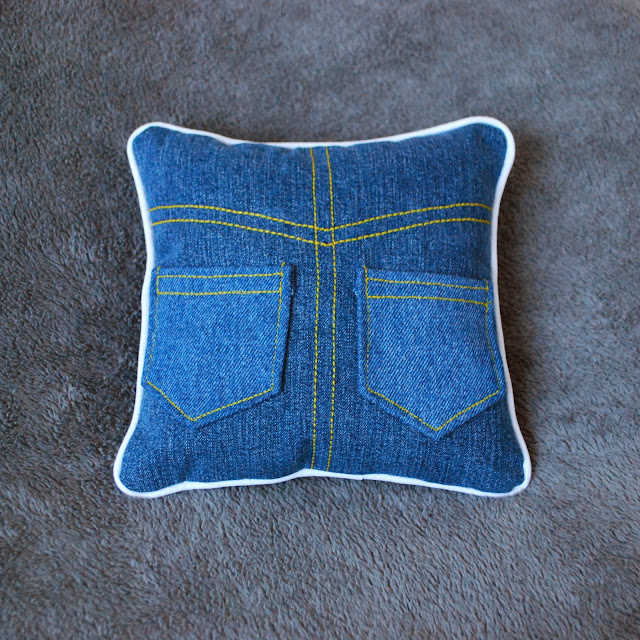 Tutorial for personal use only, please.

Linking up to: Threading My Way, Funky Polkadot Giraffe, Mabey She Made It, Nap-Time Creations, Ginger Snap Crafts, Gingerly Made, The Stitchin' Mommy, The Idea Room, Peek-a-Boo Pattern Shop, I Heart Naptime, Flamingo Toes, Two It Yourself, U.S.S. Crafty, Sew Many Ways, Scattered Thoughts of a Crafty Mom, Creating My Way to Success, Sew Can Do, Craft-O-Maniac, Sumo's Sweet Stuff, Skip to My Lou, Blossom Heart Quilts, Sugar Bee Crafts, Feather's Flights, The DIY Dreamer, Made To Be A Momma, Sew Much Ado, The Princess and Her Cowboys, Accidentally Wonderful, Katherine's Corner, Craftberry Bush, Sugar and Dots, Sewlicious Home Decor, One Krieger Chick, Stitch by Stitch, The Chicken Chick, A Bright and Beautiful Life, I Have to Say, And Sew We Craft, The Tip Toe Fairy 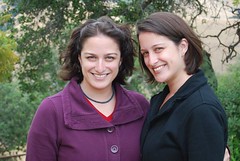